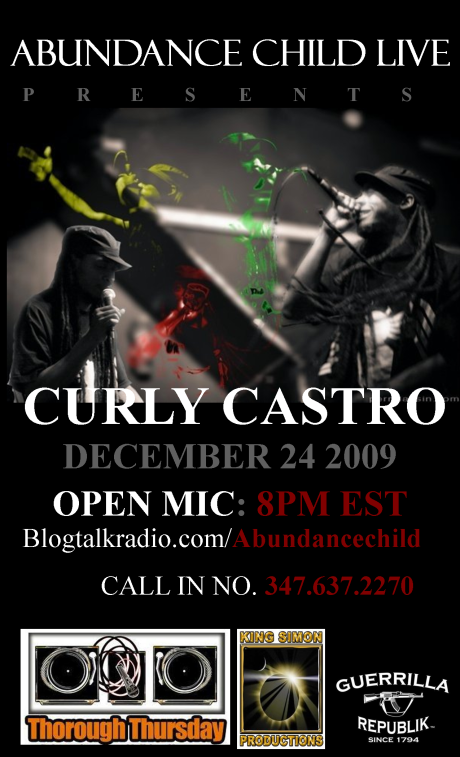 Curly Castro was born in Brooklyn, New York in the late seventies. As a child he was surrounded by the grit and diversity of his neighborhood and finds himself still inspired by all that his upbringing in Flatbush had to offer. He found himself heavily influenced by the visually striking graffiti laced trains, the fluid uninhibited movement of break dance, the political and social tensions of his community and the dizzyingly distracting boom-bap beats serving as the soundtrack. All these elements served as the backdrop for a young man who would soon become an incredible force in the hip-hop world.

He left Brooklyn to go to college in Philadelphia. During that time, he joined a hip-hop group Nemesis, befriended them and began to serve as a tool almost every hip-hop act needs for an even better live show – a “hype man”. He was know as an electric almost scene stealing personality and with each passing show, he developed an affinity for free-styling, writing rhymes and poetry. He soon became an emcee throwing around several stage names until he became comfortable with a somewhat permanent alias- “Obsidian”. As Obsidian he joined forced with two other emcees and formed the group Natural Burners. After a couple of years, Nat Burn began to collaborate with another group who was very established in the city at the time- Ghetto Hero Superman Save-A-Poets. The two posses found themselves sharing the stage at several venues on the same nights and even competing against each other in slams and other lyrical competitions. A deep respect and admiration was developed amongst the two groups and eventually a super-group was born- Bohemian Fifth.
Bohemian Fifth was a strong force in the Philly music scene and beyond. The group consisted of both emcees and poets who each were masters in their lyrical field. Obsidian continued to stand out as an amazing talent in the art of poetry, emceeing and live performance. The group, traveled extensively playing Jamie Kennedy Live, the Black Lily, opening for huge hip-hop acts like Brand Nubian, Poor Righteous Teachers, and Bone Thugs N’ Harmony, also having music featured on the Real World, Road Rules and other programs. They released a LP in 2004 titled “We the People…” which came to critical acclaim for its design as well as the music within. The group disbanded soon after, but Obsidian continued on and co-developed two other groups that would flourish at the same time: Red Identity and SquadZilla. Red Identity was an artistic collaboration of both Obsidian and Inglish (who was also in Bo 5th). The two released several projects including an ode to one of their biggest inspirations, Madlib. The two traveled the country, performing, gaining notoriety as one the best duos Philly and America has seen in years. Along that journey they meet other artists and organizations who shared their same mission of making quality hip-hop music that reaches the souls of the masses. SquadZilla was also a collaborative effort of a select group of Philly emcees and poets that Red ID respected and wanted to work with.

In recent years, Obsidian went through many musical and spiritual transitions in an ever changing and developing industry. He has even come to rest on a permanent name that describes his outer and inner characteristics as a man and citizen of the world, passionate about his people and his community- Curly Castro. People know him today by that new name, but still as hungry and full of fire as the day he first started. He continues to take hip-hop by storm with a new solo career and is admired by his peers for his lyrical prowess and charismatic stage presence. Currently he is developing two organizations : “Who’s Army” and “The Willing”, that give back to the community through music, education and overall social awareness. He recently completed a mixtape with Dj Ambush titled- Phatman & Likkle Bwoy, and is working on his highly anticipated first solo LP “Winston’s Appeal” due out in 2010.

The Best of Abundance Child Live